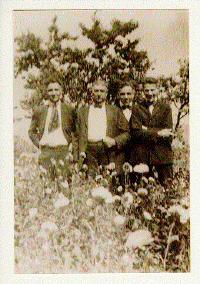 The photograph is that of Henry Adam Seiple and three of his eight children. From left to right, they are as follows: William Henry, Henry Adam, Earl Keen and Aaron J. The date of the photo, however, is not known. (Contributed by Berit Seiple Osworth)