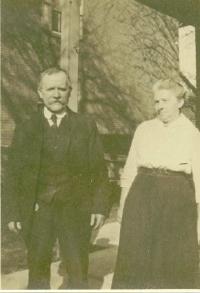 William and Amanda Seiple. Date taken is unknown, but judging from the clothing it can be reasoned that it was sometime in the late 1890's or early 1900's. William was a carpenter by trade. Contributor, Doris Norton states, " I remember in my childhood home we had a medicine cabinet that he built. In later years he worked for the Reading Railroad. He served for eight years as a member of the old South Bethlehem Borough Council and for six years was a member of the borough school board. He was a Democrat and was also a very patriotic man--actually knocking off with his cane, the hat of a man who had not removed his hat when the flag went by during a parade. My great grandparents raised my mother after her mother died when she was 7 years old."