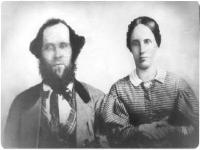 John and Harriet Cox Siple. The original photograph was taken in 1861 in Ashton, Illinois on the occasion of their daughter Rhoda's marriage to John A. Andrus in Ashton. John and Harriet are the great-great-grandparents of Roy Siple, who provided this picture.