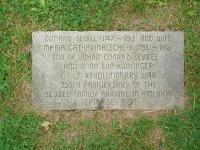 Marker for the grave of Conrad Seibel, Revolutionary War veteran. The marker is at the edge of the parking lot of the Easton Public Library in Easton, PA. Photo taken by Roy Siple.